So I decided on a new project, I get all these cool images from GOES and other NOAA sats, but the only time I really look at them is when I am in front of my PC. I thought, “wouldn’t it be nice to see them any time, in a frame, just hanging there on a wall?” So I built a digital picture frame, using an extra PI I had, an HDMI display (any HDMI monitor will work, and some python scripting and some free software. I am not the first to do this by any means, but I took it a step further and used a more complex display software that allows “Ken Burns” style panning of images, fades, and transitions, can be controlled with Alexa or Google Voice can crop in an say a continent or region like Australia or closer to home, the Great Lakes and much more.

First I was lucky that someone shared their modified script for downloading imagery from NOAA sites, which made it relatively easy to just grab those and my own images. I modified several of the scripts and now display imagery from GOES16 and 17, Himawari 8, NOAA 20, and others. 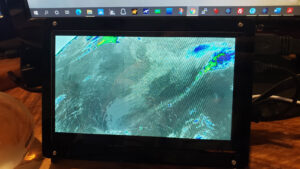 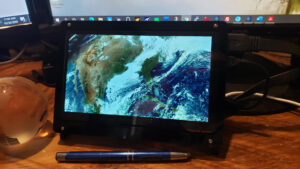 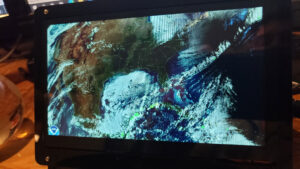 Later I’ll make a nice wooden frame for this!

Heres is a zip file containing the python scripts for downloading imagery.

Down load that file and save it, we’ll be using it later.

Stop the screen from going blank

By default, the screen will go blank when there is no keyboard or mouse movement detected. Since this is a picture frame with no mouse or keyboard, all commands will be entered via SSH even though we are using the full graphical version of Raspberry Pi OS

After the editor opens, change the content to this:

Hit CTRL + O to write the file to disk and then CTRL + X to exit the editor.

If the display on your screen is not completely filled but instead shows a black border, you will need to disable Overscan.

Create Folders for Script and images

Get the Python scripts and install them

NOTE: I have included the versions for Raspberry pi 2, 3, and 4 as they are different, and one command may not work for the other!

On a Raspberry Pi 4

Next, we want to make sure that your photos start automatically when you turn on your Raspberry Pi.

We will use the systemd services to manage the Pi3D script at boot. There is again a slight variation for the Raspberry models.

For the Raspberry Pi 2 and 3

Now, change the file permissions to make it readable by all by typing

For the Raspberry Pi 4

Now, Change the file permissions to make it readable by all by typing

You can schedule your picture frame to turn on and off at specific times by using two simple cronjobs. For example, say you want it to turn on automatically at 7 am and turn off at 11 pm. Run crontab -e and insert the following two lines.

Note that this won’t turn the Raspberry Pi power’s on and off; it will just turn off HDMI, which will turn the screen off. The first line will power off HDMI at 11 pm. The second line will bring the display back up and restart the display manager at 7 am.

Open PictureFrame2020config.py in an editor.

If you want to get going with the most often used settings, just look at first three:

This line defines the directory where you put your images. Note that it is recursive, so all subdirectories are included. In the case for GOES imagery case, it will be “/home/pi/images”. Edit the line as follows and don’t forget to include “/home/pi/”.

This line specifies the time between two images in seconds. For a living room picture frame setting, I have found a value of 50 ideal. Don’t make it too short as you need to include the time for the transitions between the images.

This line defines the length of the transitions in seconds. 10 is ideal. If you have a 4K display connected, 5 is ideal.

If you are in a hurry, you can skip the other parameters and jump to “Testing Pi3D”.

When Pi3D starts, it creates a shuffled playlist of all the images. This is to ensure that every picture is shown exactly once before the playlist restarts. If you set “default=1”, it will reshuffle the playlist every time it has finished. “default=5” will show the same shuffled list five times. I recommend setting it to “1”.

Often, the aspect ratio of an image will not correspond to the aspect ratio of the screen. “default=True” means that the entire image is shown which can lead to black bars left/right or top/bottom (pillar or letterboxing). “default=False” means that the image is stretched until it fills the entire screen. I only upload landscape formatted images on my frame, so I choose “False”.

Whenever new images are added to your images folder, Pi3D will reshuffle the playlist. “recent_n” will play the newest ones first (based on the Exif date), which is nice. You can set this number to “default=10” if you want to show the ten newest images or “0” if you want to turn this functionality off.

Pi3D regularly checks to see if new images have been added to your images folder. “default=60.0” means that the check happens every minute. Keep this setting.

This value specifies the number of frames during the transition period from one image to another. The more powerful your Raspberry Pi, the higher this value can be, but even with a Pi 4 I found no real difference above “20”, so I would not change this one.

This is a very important setting if you want to remote control your picture frame either through voice with Alexa, Google Home Assistant, iPhone, or Internet of Things devices. Set it to “default=True” if you want to use it.

And if you do, don’t forget to add your MQTT broker server address. If you are using a locally installed broker, just add the IP address or the Bonjour counterpart (“pictureframe.local”). If you don’t have a user and password, just leave the value empty.

Unless you haven’t already done so, don’t forget to install the paho package on your Raspberry Pi which allows for the receiving of MQTT messages. It is just one line:

Rotating the screen for the Raspberry PI 3

Based on how you want the display rotated, enter one of the following lines to the bottom of the file.

If you want to rotate the orientation of the LCD connection, instead you can use
display_lcd_rotate instead of display_hdmi_rotate.

Then Add the setting you want to the  bottom of file.

This setting will reset the rotation of your Pi’s screen to normal. This setting represents the default behavior.

Using this setting will rotate the screen by 90 degrees. This option is equivalent to rotating the screen to the right.

With this option, you will be rotating the output of the display by 180 degrees. This is the same behavior as inverting the screen.

Changing this option to 3 will rotate the screen by 270 degrees. This would be the same as rotating your screen to the left.

Once you have entered the line you want, save the file by pressing CTRL + X, then Y, followed by ENTER.

Rotating the screen for the Raspberry Pi 4

Due to the new video driver used for by the Raspberry Pi 4, you are unable to rotate the screen using the old /boot/config.txt method.

Instead you will need to make use of the xrandr command.

In the terminal of your Raspberry Pi run one of the following commands.

If you want the rotation to affect the second HDMI slot try using HDMI-2 instead of HDMI-1 in the commands below.

This command resets the rotation back to normal.

The command above rotates the screen output to the left. This is the equivalent of rotating by 90 degrees.

This line rotates the screen to the right. This command is the same as turning the screen by 270 degrees.

This final command flips the screen. This behavior is the same as rotating the screen by 180 degrees.

Copy and add this to the new file that you created.

Once you have entered the lines, save the file by pressing CTRL + X, then Y, followed by ENTER.

Load your first set of images- you will only need to do this once, so that the PictureFrame2020.py has some images to work with. This will take a couple of minutes!

Configure the PI to load first set of images on reboot.

Add the following before the exit 0 line in this file

Create a cron entry for autoloading the GOES imagery

Paste this into the crontab

Now, you should have a working Picture Frame enter:

And when it starts back up you should have NOAA Goes Imagery scrolling up or down, left or right across your screen.

If you want to select a different image to be downloaded or displayed, you will need to edit the scripts, or, better yet, copy a script then edit it and save it as a new file. As long as you have a good link to an image, you can display it. It could be from GOES, Himawari-8, GK2A, Eumstat, NOAA 20, any one of these as long as you have a link to the image.

There are basically two or three areas that you would need to edit. As shown in the below script for downloading the full-disk view from GOES17 and resizing the image. If we wanted to change to say. down load the current image for Himawari 8 in full color do this:

Create a copy of the current script, and edit it in Notepad++
Look for this line:

And replace it with the correct link for Himawari 8

Then edit this line:

you can also edit the resize porting of the script to a cropping function is you wanted to just, as an example crop the image so just New Zealand is shown.

If you want to display your own imagery received by you from a Satellite you could change this portion of the code:

To this (as an example):

You could add in a section to the script to look on a remote folder as well, and then have the script choose the most recent file with something like this: