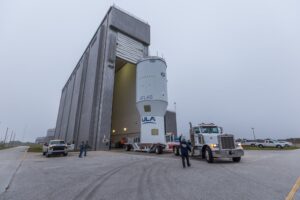 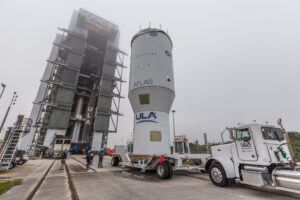 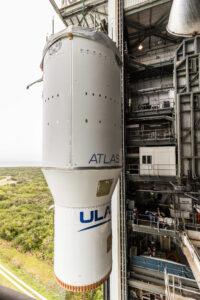 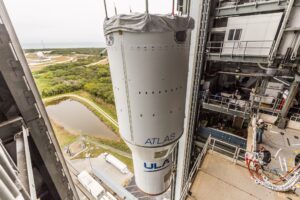 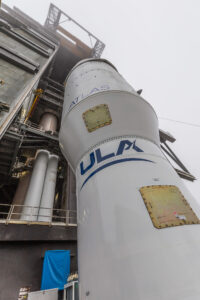 Assembly of the rocket, designated AV-095, began on Jan. 31, 2022, The 107-foot (33-meter) long first stage was delivered to the VIF, hoisted upright, and positioned aboard the Mobile Launch Platform pedestals.

The following days, Feb. 1-4, featured the attachment of four GEM 63 solid-propellant motors to the first stage. The boosters will provide nearly two-thirds of the total thrust at launch to power the Atlas V on its journey to orbit.

The pre-assembled structure featuring the interstage, the Centaur upper stage sporting its RL10C-1 engine, and the lower halves of the payload fairing were raised atop the rocket on Feb. 7 to complete the initial buildup of the launch vehicle.

Testing of rocket systems will be completed over the coming days, leading to the encapsulated payload arriving at the VIF for integration atop the Atlas V in mid-February.